Growing up in a Middle Eastern household meant that our snacks were quite different from our neighbourhood school friends houses. While they were making themselves a toasted cheese sandwich, baked beans on toast or 2-minute noodles, it was common for me and my brother and sister to be eating Manoushah, a Lebanese flatbread toasted with Zaatar spice mix and olive oil. Think ‘middle eastern herb bread’. It was so delicious and probably the start of my obsession with herbs and spices. Today I have gotten very creative with Zaatar, as it’s such a lovely flavour. I use it as a sprinkle on toasted bread, hommus dip or roast vegetables. It’s also great on fried eggs. Another way we use it is to flavour lamb cutlets.  And have been known to include it in a roast marinade along with garlic, chilli and paprika.

One of the secrets to a good Zaatar is to use fresh sesame seeds, and toast them until they are a golden brown. The toasting releases the wonderful sesame oil, giving a gorgeous nutty flavour

if you’ve never had sumac before, it is made from the dried and ground berries of the wild sumac flower. Sumac is a tangy spice with a sour, acidic flavour reminiscent of lemon juice. This fragrant spice is used to brighten up dry rubs, spice blends like za’atar, and dressings. Sumac is also commonly used as a garnish, to add a pop of bold colour or slight acidity to a dish before serving. Za'atar is a blend of dried herbs like oregano and thyme, and earthy spices like cumin and coriander, with roasted sesame seeds and the most important ingredient of all… sumac! Sumac lends a wonderful citrus tanginess that makes the whole recipe sing. 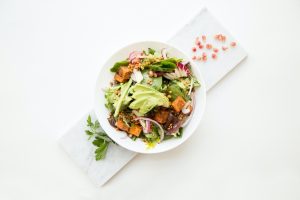